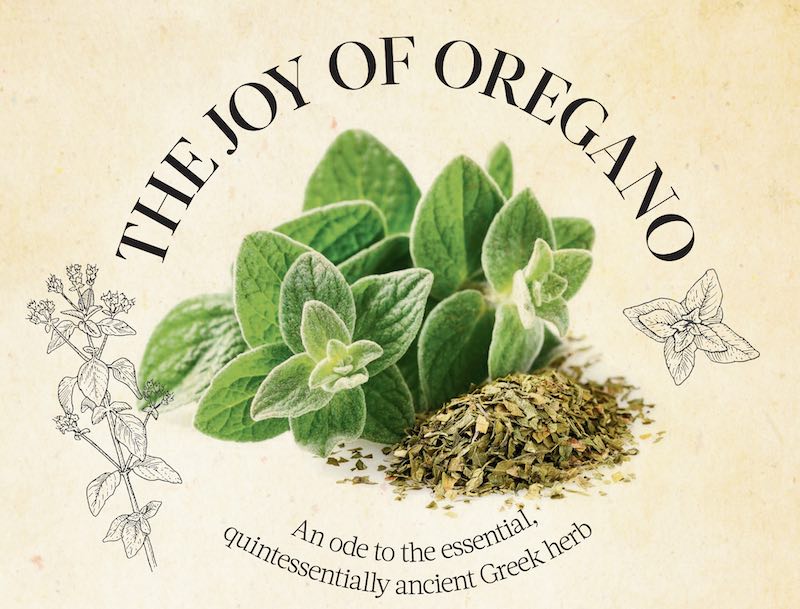 The history of oregano begins in ancient Greece. The word “oregano” is derived from two Greek words, “oros” (mountain) and “ganos” (joy), giving it the meaning of “joy of the mountain.” It is believed that Aphrodite, the goddess of love and beauty, created oregano as a symbol for happiness and joy. She grew the herb in her garden on Mount Olympus. The ancient Greeks crowned newly married couples with garlands of oregano as a blessing of happiness upon their marriage. They also planted oregano around their houses to ward off negative energy, and wore wreaths of oregano on their heads to sleep to encourage pleasant dreams. The Romans later adopted oregano, and it then spread to the rest of Europe, China, and northern Africa, where it impacted and shaped many of these countries’ cuisines. In Greece, this fragrant herb can be found all over the countryside. It grows abundantly on Mt. Taygetos (just outside of Kalamata), the highest mountain in Lakonía, Greece.

This is my favorite oregano, and the variety I use in all my cooking. Some of my fondest memories with oregano are of gathering it fresh and drying it on our rooftops in Greece. Once dry, we would rub it on towels to extract the flowers from the branches.

An Ancient Panacea Perhaps we should not be surprised that oregano was believed to bring happiness; after all, it seems to cure almost everything. Since ancient times in Greece, herbs have been used both as a food and a source of healing. As a food, they were a main staple alongside fruit and vegetables, and were preferred over meat and milk. The ancient Greeks were also the first to realize the amazing healing properties of oregano. Hippocrates, who penned, “Let food be your medicine, and medicine be your food,” recommended the use of a lot of aromatic herbs in cooking to satisfy hunger with just a little food and prevent overeating. Hippocrates also used oregano oil to treat cuts, skin infections, psoriasis, and stomachaches. Oregano oil has antibiotic and antioxidant properties, and in ancient Greece was brewed as a tea with honey to treat coughs, colds, and asthma. hen store it in glass containers for later use.