(Content from the book/eBook Cooking & Eating Wisdom for Better Health”) 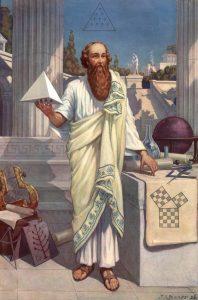 he soul-love, much larger than the body, attuned the body like an instrument which has seven chakras and the ‘strings’ of meridians so that to sound in harmony with the universe. This instrument allows the human soul to create the Great Music of Life and Harmony. – Pythagoras

Healing with sound (“music”) dates back as far as ancient Greece. In Ancient Greece music was used as therapy. The actual word ‘therapy’ comes from the Greek therapia, meaning ‘to serve or help medically’. Music was also used to still and lift the spirit.

In ancient Greece, patients recovering from illness could leave their rooms to attend musical performances to assist in their healing and quick recovery. Music therapy could benefit many hospitals patients and it’s a shame it is not currently practiced. Plato believed that all our senses were gifted to us by God to speak to our souls in a pleasurable way through the vibration of music.

The word ‘music’ comes from the Muses, the daughters of Zeus who were the patron goddesses of creative and intellectual endeavors. Music and singing are an important practice in Greece whilst cooking. Additionally, in ancient times bread-making was often accompanied by a flute player. All breads were musically inspired and the music actually created the many shapes and sizes in bread seen in many countries today.

Aesculapius cured mental disorders with songs. The philosophers Plato and Aristotle claimed that music affected the soul and the emotions. Hippocrates played music for his patients, too. Music played a very important part on my personal healing journey.

Pythagoras is also credited as being the first person to use music as medicine. There were many musical instruments in ancient Greece and included the harp, kithara, lyre, organon, flute, tambourine and the water organ. The flute and the lyre were two of the primary instruments used by Pythagoras and his followers for healing purposes. He is also credited with being the first to understand musical intervals from his work with the monochord, a single-stringed instrument in which the string tension was established by a fixed weight.

Pythagoras discovered that music had great therapeutic power and he prepared special harmonies for various diseases. One of his unique curative processes resulted from his discovery of the healing value of certain verses from the Odyssey and the Iliad of Homer. At his school it was customary for the Pythagoreans to open and close each day with songs. Pythagoras also cured many ailments of the spirit, soul, and body by having certain specially prepared musical compositions played in the presence of the ill person or by personally reciting short selections from such early poets as Hesiod and Homer.

Pythagoras also utilized music, singing, playing musical instruments and dancing to clear any blockages in the chakras i.e. any trapped mental or emotional stress or fears. He believed that music could heal any physical ailment for it purified a person’s thoughts.

The Pythagoreans believed that everything which existed had a voice and that all creatures were eternally singing the praise of the universe. Humans failed to hear these divine melodies.

Music is vibrational and can transform one’s mood, energy and state of mind. Music while cooking, eating and in everyday life can have a profound effect on us. Music can make our hearts sing with joy and our souls attain peace. Playing the right music can relax us and help us achieve a sense of inner calm. It can reduce any stress or anxiety we may feel in our lives and help us relax so that we can find the answers that we are looking for and vibrate lots of good energy into our dishes.

Our bodies are made of predominantly water. Our cells have properties of liquid crystals. A good example of this an LCD screen that is made of crystals and when sent electronic signal i.e. vibrations, the quality of the liquid crystals change. The crystals change into colors and shapes. Music is an electronic signal that is sent to the cells in our bodies and they respond accordingly. Device frequency therapy has been used by medical practitioners to destroy cancel cells successfully (Please refer to “Shattering cancer with resonant frequencies”: Anthony Holland at TEDx Skidmore College).

There are many types of music therapies. One of these is tuning fork sound therapy. Musicians have developed tuning forks to emulate some of the frequencies Pythagoras used in Ancient Greece to heal people. For example, Pythagorean Tuning Forks 2/3 Ratio (256hz & 384hz), by Jonathan Goldman. These tuning forks represent a powerful new way of using sound to resonate the body, brain and etheric fields. Tuning forks can also provide sound therapy for a deep state of relaxation and meditation.

I enjoy listening to 432hz music before I sleep. This frequency helps me attain peace and calm. It sets the scene for restful sleep. The new Tesla Towers will be on the same frequency.

While music therapy is still considered an alternative to modern medicine, scores of evidence suggest that music is effective and necessary for our emotional and psychological health. It’s unfortunate that it remains misunderstood and yet in Ancient Greece it was part and parcel of a doctor’s prescription. I use it in my health and wellness practice with great success. To me, as to Pythagoras, music is not merely entertainment but a therapy. It assists in actuating healing power from within; The healing powerful energy of God. As Pythagoras rightly reminds is “there is geometry in the humming of the strings, there is music in the spacing of the spheres”. I hope in the near future that music therapy in can be embraced as it once was in Ancient times.

You can learn more about the Ancient Greek Practices and Tools for Health, Happiness and Harmony in our new online course on TEACHABLE.