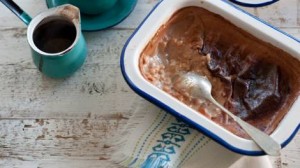 The word rice derives from the Greek ὄρυζα (oruza), Rice originates in Asia. From China across to ancient Greece, from Persia to Africa, rice migrated across the continents and around the world. It is said that it was brought to Greece about 300 BC by the armies of Alexander the Great.  Rice has been known since Ancient times in Greece as a cure for diseases of the digestive tract since the time of Theophrastus (370-285 BC).  The Greeks embraced rice and it features in many recipes including stuffed vegetables (gemista), pilafi, dolmades, avgolemono soup and off course rizogalo. Rizogalo is a traditional Greek rice pudding dessert. I have added chocolate to the traditional recipe

Place the milk and sugar in a saucepan and bring to a gentle simmer, stirring, over medium heat. Add the rice and simmer for 5 minutes. Remove the pan from the heat, add the chocolate and mix through. Pour the mixture into a 1.5 litre baking dish. Dust with cinnamon.

Transfer to the oven and cook for a 40-45 minutes until the rice is cooked, and the rizogalo is thick and creamy.

Allow to cool for 10 minutes before serving the Chocolate Rizogalo – Greek Rice Pudding.